Choking is one of the most frequent causes of emergencies and death in children under five years of age. Young children most commonly choke on foods such as nuts, raw vegetables and popcorn; but can also choke on small toys, coins, buttons, jewelries, and other small items.

Early recognition of choking is essential in providing immediate first aid. So, how do you know if a baby is choking? 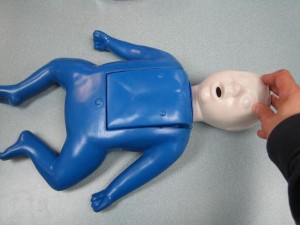 Choking usually proceeds in a predictable cascade of events. First, the infant may cry or cough, become irritable, and try to hold on her neck (partial airway obstruction). At this point, you should encourage the baby to cough out the foreign body. If the blockage is not removed, the baby may have difficulty breathing and begin to appear blue (complete airway obstruction); the baby can eventually lose air and become unconscious. You need to act quickly to dislodge the blockage.

If you have completed a first aid course, you should remember the procedures to take. But if you have not, try to grip your baby with their face down at your lap or forearm while your support the head with your hand. Using your other hand, apply five blows between the shoulder blades on the back. Open the mouth of the baby to check if the foreign body has been dislodged. Attempt to remove obvious blockage. However, do not put your finger inside their mouth and try ‘blind sweeping’ the obstruction because this may push the object deeper. Attempt to remove the blockage only if you can clearly see and reach it.

If this does not dislodge the object, attempt to perform chest thrusts. Place the baby on her back on a stable surface and give five chest pushes. Using two fingers thrust inwardly and outwardly over the middle part of breastbone towards the head. Attempt to dislodge the object at each thrust. However, never do all five thrust at once automatically. Check the baby’s mouth at each thrust if the object has been displaced.

If chest thrusts are not effective, call 911 or your local emergency services. Take your baby with you, do not leave her alone. While waiting for help to arrive, continue back blows or chest thrusts. If the blockage is not dislodged despite your attempts or the baby becomes unresponsive, be ready to provide CPR. Take note that Child and infant CPR techniques are quite different than that of adult CPR. It is best to complete a pediatric first aid course to learn the proper CPR procedures.

After a choking incident, make sure to bring your baby to the doctor or the emergency department, even if the baby appears fully recovered. Babies who received chest thrusts will need to be checked by a doctor. Moreover, some of the blockage may have remained which can eventually lead to problems later on. If the baby has difficulty swallowing or is still coughing continuously, the baby should be seen by a doctor immediately.