An individual may have an extreme sensitivity to certain venoms of

insects such as; hornets, bees, wasps and fire ants. Venom hypersensitivity was previously thought to be an IgE-mediated hypersensitivity reaction and it comprises an acute medical emergency that needs to be treated as promptly as possible. Although insect stings in any area of the body can trigger an anaphylactic reaction, stings in the neck and head areas as well as multiple stings in the body constitute much serious complications.

Clinical manifestations can often range from generalized urticaria, and malaise, anxiety due to narrowing of the pharynx caused by edema and bronchospasm, shock and eventual death will most likely occur if not treated promptly. Generally, the shorter the time between the sting and the onset of the signs and symptoms appear, the worse is the prognosis.

The first management when treating insect stings is to locate the stinger and its removal. If the sting is from a bee the venom is associated with the sacs around its barb of the stinger itself. The stinger must be removed ideally with a quick scrape of a fingernail over the site of the sting. Proper wound care should be done by washing the area with soap and water for most stings to prevent infection.

Scratching should be avoided because it will result in an increase in histamine response. Ice application can also help reduce swelling and to a degree can lessen venom absorption. Moreover, an oral antihistamine and analgesic medication will also help in alleviating the itching and swelling.

Venomous/poisonous snakes accounts for an estimated 8,000-10,000 bites in North America alone and each year 10-20 people die as a result of venomous snake bites. Children age 14 years old and below are the most common victims of snake bites. The greatest number of snake bites normally occur through the daylight hours down the early evening where snakes and other reptiles are normally more active.

Snake venom consists largely of proteins that results in a wide range of physiologic effects. It is known to target vital organs such as the nervous system and pulmonary system which always often leads to eventual death if not properly treated.

The classic clinical manifestations of venomous snake bites are edema, ecchymnosis and hemorrhagic bullae which result in tissue necrosis and cellular death at the site of the bite. Symptoms include lymph node tenderness, nausea, vomiting, numbness, paralysis, and severe pain at the site of the bite. With decisive treatment absent or even delayed, these initial symptoms will ultimately progress to paraesthesia, hypotension, internal hemorrhage, seizures, coma and death. 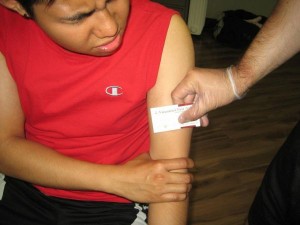 Initial first aid care at the site of the snake bite should include letting the victim lie down in a comfortable position and remove restrictive clothing, provide warmth, wound care, and immobilizing the injured body part below the level of the heart. The ABCs (airway, breathing, circulation) of emergency CPR are the main priorities of care. Ice and the use of a tourniquet is strictly contraindicated. A complete narrative of events must be obtained by the ED personnel and a quick but comprehensive physical assessment should be done for appropriate treatment protocols to be initiated.

The course and prognosis of the snake bite injuries will highly depend on the kind and amount of venom injected into the victim, the area of the bite. Furthermore, the age and general health of the victim is also considered in the calculation of the amount of antivenin to be injected. There is no one general rule in treating snake bites. Antivenin is primarily the most and only effective way to counter the effects of snake venom. Parenteral fluids are used to treat hypotension and corticosteroids are contraindicated during the first 4-8 hours of hospitalization as they are known to suppress the effects of the antivenin.